Dreich House
Adventure Activity Holidays for Children that Nobody Loves

Written and directed By Chris Lee

Fifteen year old Ruby Love isn't looking forward to the Christmas holidays. On the last day of term she is shoved into a taxi by her cold but glamorous mother. A nightmare one hundred and twenty mile an hour journey later, she is abandoned at the forbidding gates of Dreich House, a Victorian gothic pile in a remote Scottish Glen. To the outside world Dreich House is just another run down adventure activity centre, but to its clients it's a holiday destination with a single dark purpose, to 'disappear' children that nobody loves without a trace; satisfaction guaranteed...

This production is for families, children and young people aged five plus. 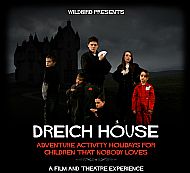