The Greatest Little Republic (in the world!)

Comar presents a Mull Theatre production, in association with Wildbird

A new play by Chris Lee

In a troubled world, The Greatest Little Republic (in the World!) is a tiny beacon of peace and civilisation, or so its proud citizens would have you believe.

Part thriller, part Greek tragedy - with some humour along the way - GLR could be set anywhere in the world, but may offer some reflection for a nation faced with the power to re-shape its own future.

The Greatest Little Republic (In The World!)

On the vague off-chance that anyone has woken up in Utopia this morning, it might be worth visiting the fictional town in Chris Lee's new play for Mull Theatre to find out the extent to which such Shangri-las can be spoilt.

Loosely based on Andorra, by German writer and contemporary of Bertolt Brecht, Max Frisch, Lee gives this epic yarn a contemporary spin that goes way beyond his source's analogies to his own era's cultural prejudices to capture something utterly current.

Launched with the sort of triumphalist fervour that would make a VisitScotland ad look understated, Alasdair McCrone's production sets Lee's play in a walled city which, while looking like an ancient Greek ruin, also oddly resembles McCaig's Tower in Oban. Here a former war journalist drowns his sorrows while his adopted daughter Anissah, seemingly an interloper from a land regarded with suspicion, works the local bar.

Forever close to her brother Johan, played by James Mackenzie, Anissah is lusted on by a mutual friend, though only when they leave school and go out into the world do their opposing ideologies become clear.

With suicide bombings and wars on terror both in the mix, following a deceptively chipper opening, immigrants are demonised and scapegoats abused in Lee's increasingly dark scenario that could easily be set in apartheid era South Africa or in the Middle East right now.

Helen McAlpine as Anissah leads a big ensemble cast in this bold outing, produced by Mull's increasingly ambitious umbrella arts organisation Comar, which remains a grown-up and thoroughly serious look at how popular movements can cause empires to crumble. 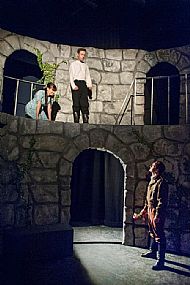 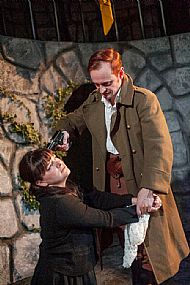