Graeme Roger was commissioned by Grizedale Arts to be their ornamental hermit for the celebrations for the Queen's Golden Jubilee in 2002.

'Long nails and bedraggled hair became a sign of wealth in the 18th century, when ornamental hermits took pride of place in eccentric England.

Ornamental hermits were not real hermits but men employed by rich state owners to amuse guests by making appearances and living in hermitage.

One of the most notable hermit employers was the Honourable Charles Hamilton, of Painshill Park in Cobham, who advertised for a man to reside in his poorly built hermitage in the 1740s.

The advertisement read: “The hermit must continue on the hermitage seven years, where he shall be provided with a Bible, optical glasses, a mat for his feet, a hassock for his pillow, an hourglass for timepiece, water for his beverage and food from the house.”

He was ordered to wear a camlet robe and was forbidden from cutting his hair or nails. He was not allowed to speak or stray from the grounds of the estate.

The fee was 700 guineas, but this would only be paid if the hermit served the whole seven years, and no money would be given if he left before this time or broke the rules.

Legend has it that the first hermit lasted three weeks before running away and being found drunk in a nearby hostelry.'

This was followed in 2003 with the 'Roadshow' tour, a live project 'which toured the UK presenting art like never before.'

Roadshow, a group show co-curated and devised by Adam Sutherland, FlatPack001 and Ceri Hand touring to:

Roadshow took artwork, artists and curators on tour to rural venues across the UK. The project was devised and developed by Grizedale Arts, FlatPack001 and the commissioned artists. The outcome was 3 outdoor weekend events and three indoor gallery events, showcasing a wide range of new work, from live performance to film and video. 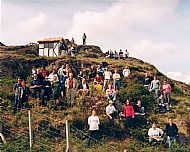 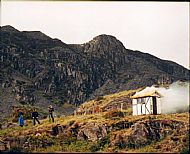 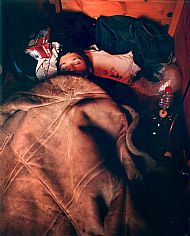