The Mysterious Death of Netta Fornario

A Gothic tale of magic, madness, murder and mystery set on Iona. Mixing fiction with real events - the unexplained and controversial death of Netta Fornario, a remarkable young lady closely linked to the inner circle of the Occult Society of the Golden Dawn.

On a bleak November day Dr John Tyler arrives on Iona at the crisis of his life. Suicidally overwhelmed by his experience in the Field Ambulance Service during The Great War, Tyler has come to the Island determined either to make a new beginning or to end his life. Tyler Books into Traighmor, the windswept guest house of young widow, Ruth Blacklock, and her illusive young son Duncan. During a stormy night of dreams and visions,  he meets fellow guest Netta Fornario, an Italian - English occultist and practicing Golden Dawn magician.  Beautiful and extraordinary, he is unable to resist Netta or the equally intriguing Mrs Blacklock, and as Netta's health and sanity appear to deteriorate Tyler is drawn into a world of magic, revenge and terrible secrets that lead to love, tragedy and ultimate redemption.

The Mysterious Death of Netta Fornario, a Mull Theatre and Wildbird co-production, opens on Mull and will tour in Scotland

follow the link below for  the feature by North by North East...

Follow the blog by writer and director Chris Lee......www.mulltheatre.com/Nettablog.html

check out the review below.....

EVEN before Chris Lee’s play begins, the atmosphere is unsettling. There is something weird happening, a quiet muttering in the background and an eerie light on the simple set.

Then it is underway. It is the 1920s. A doctor injects himself with morphine in a guest house bedroom on Iona, confessing not to a god, but to the syringe. ‘Bless me needle, for I have sinned,’ he says. There is only one other guest: Netta Fornario, who is either supernaturally possessed, or mad. They are hosted by Ruth, who carries grief with her, and ‘has a lost face’. The stage is set for a gothic drama to unfold.

On Iona, ‘the dead overshadow the living’, Netta Fornario says. Each of the three characters is wrestling with their own pasts, and with the ghosts of people they loved or hated. Through dreams and nightmares, lies and revelations, these other characters make themselves felt, invisible presences crowding ‘this too small room’ of the stage.

It is a tiny stage, and the triangle cast generates a sense of suffocation. We see everything through the eyes of Doctor John Tyler as he inserts himself within the tense circle of Ruth and Netta’s relationship. He brings his own dysfunction, traumatic nightmares from the first world war trenches which he tries to control with drugs. He is ‘a blunt pebble thrown at calm water’ and his arrival precipitates a crisis, which heightens Netta’s madness, if she is crazy, or opens a new channel for ‘the secret chiefs’, if she’s a witch.

Ruth’s troubles unfold. Her husband is dead, and is not missed as much as might be expected. Her son Duncan is, throughout the first half, just off-stage. His unhappy fate is revealed later. By the end, the full story of the mysterious death of the title has been told, but not explained.

The play is full of memorable lines (‘If I’m ill I want to be healed, not cured’; ‘Love is possession, but it’s also surrender’) and peppered with marvellously-written spiritualist nonsense. Rebecca Sloyan, as Netta, could perhaps have made more of this script, and could have got away with being a bit more mad, but it’s probably better to understate this as she did, and leave us guessing, than to overdo it, or try to play for laughs.

Mairi Philips is excellent as melancholic Ruth and the two women convey well the ambivalent sisterliness and mutual paranoia of their friendship. Greg Powrie plays John with a certain stiffness that fits the period, and convincingly unravels as a doctor who cannot love, cures rather than heals and has his own guilty secret.

The revelation of that secret is done with technical wizardry, a marriage of film and theatre, which is a feature of the performance in this joint production between Moray-based Wildbird and Mull Theatre. The set is enhanced by a video-backdrop: interiors have flickering candlelight or the full moon beaming through a window, and exterior scenes are played out against a windswept Ionan beach or bleak moorland, complete with scudding sky. Throughout the action, waves crash on the stony beach, rain batters on the window and creepy sounds create the spine-tingling mood of uncertainty that pervades the play.

Lochinver Village Hall has a history of bringing innovative drama to this remote north west community. There has been a brief hiatus after Alex Dickson stepped down from his role as the organiser of ‘entertainments’ in Assynt, but a new team, led by Clive Sheppard, has stepped in to continue the tradition. Long may it continue. 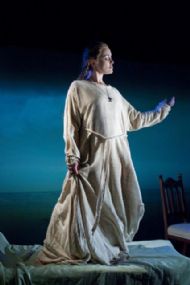